These were the words I heard from a man who was upset with my presence with a camera in his Philadelphia neighborhood. His sentiment was shared by neighbors who were beginning to gather around my curious presence. I could have left, but I didn’t. I explained my purpose — I was there to create an in-depth photo story of his forgotten neighborhood — and I kept coming back. Two or three times every week. For three months.

When I was in Philadelphia this summer, I had an urge to keeping shooting in my time off from an internship that involved absolutely no photojournalism.

So I found an interesting neighborhood, the Forgotten Bottom, and tried to tell the story of life in a forgotten enclave of the city.

When the summer was up, I had a somewhat confused collection of photographs, but I was intent on making it a story — and possibly getting it published. I made edit after edit and solicited feedback on top of feedback from my professors at school. But I just didn’t feel like I was getting it right. The pictures were solid, but there wasn’t a compelling story.

This weekend, I solicited feedback one last time, from an AP photographer who’d worked in Philly for decades. To put it bluntly, he tore my work apart — it was brutal. But I think that’s what I needed to recognize that not every story is a winner, and it won’t always work out.

Having now accepted that this story is, quite simply, a failure, I realized I still learned a lot from it:

Being persistent is hard work. Coming back when the odds are against you is exhausting, it makes you feel really inadequate. But it can make for really rewarding photographs.

It’s all about approaching strangers. Knocking on doors, getting inside — this still terrifies me, but this story pushed me to do more, but not enough, of that.

Context is important. I tend to shoot close, but some of these harsh critiques showed me the power of shooting wide and giving the viewer more information.

Failure is a good thing. It forces you to be critical of your work and identify ways you can improve. It kills me to move on from this piece after spending so much time on it this summer, but it was not for naught. I learned so much about myself and about my craft. It was worth it.

And with that, here’s one final edit of my failed photo story from the Forgotten Bottom. 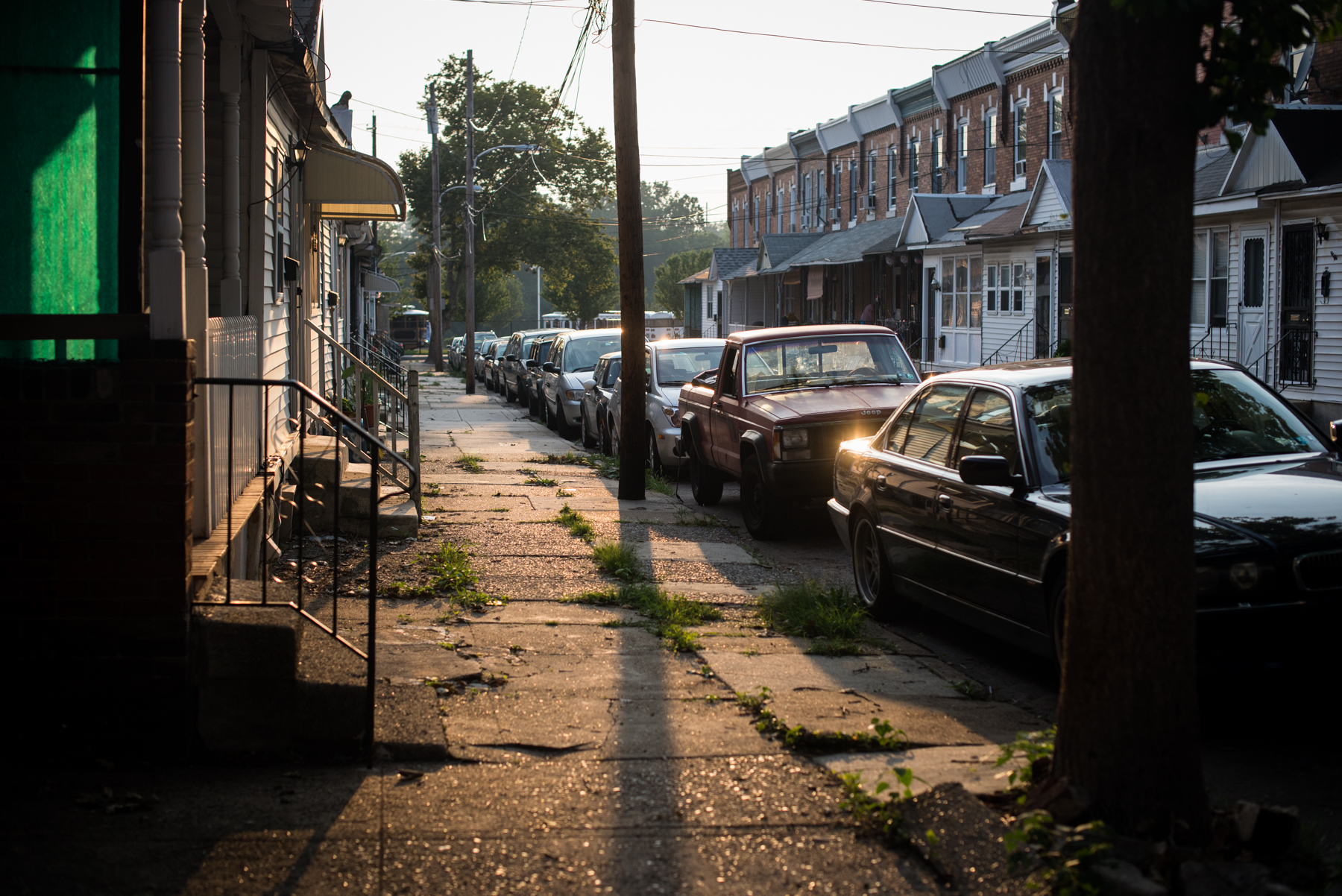 When Jimmy Young, the American boxer who’s famous for losing in a disputed scuffle with Muhammad Ali in the 1970s, was growing up here, things were much different. The streets bustled with local businesses and factories, which employed most of the residents. Kids would run between the bars, playing pranks for the adults. The streets were unfilled by traffic. The neighborhood was segregated by nationality, but still part of the larger Gray’s Ferry area. 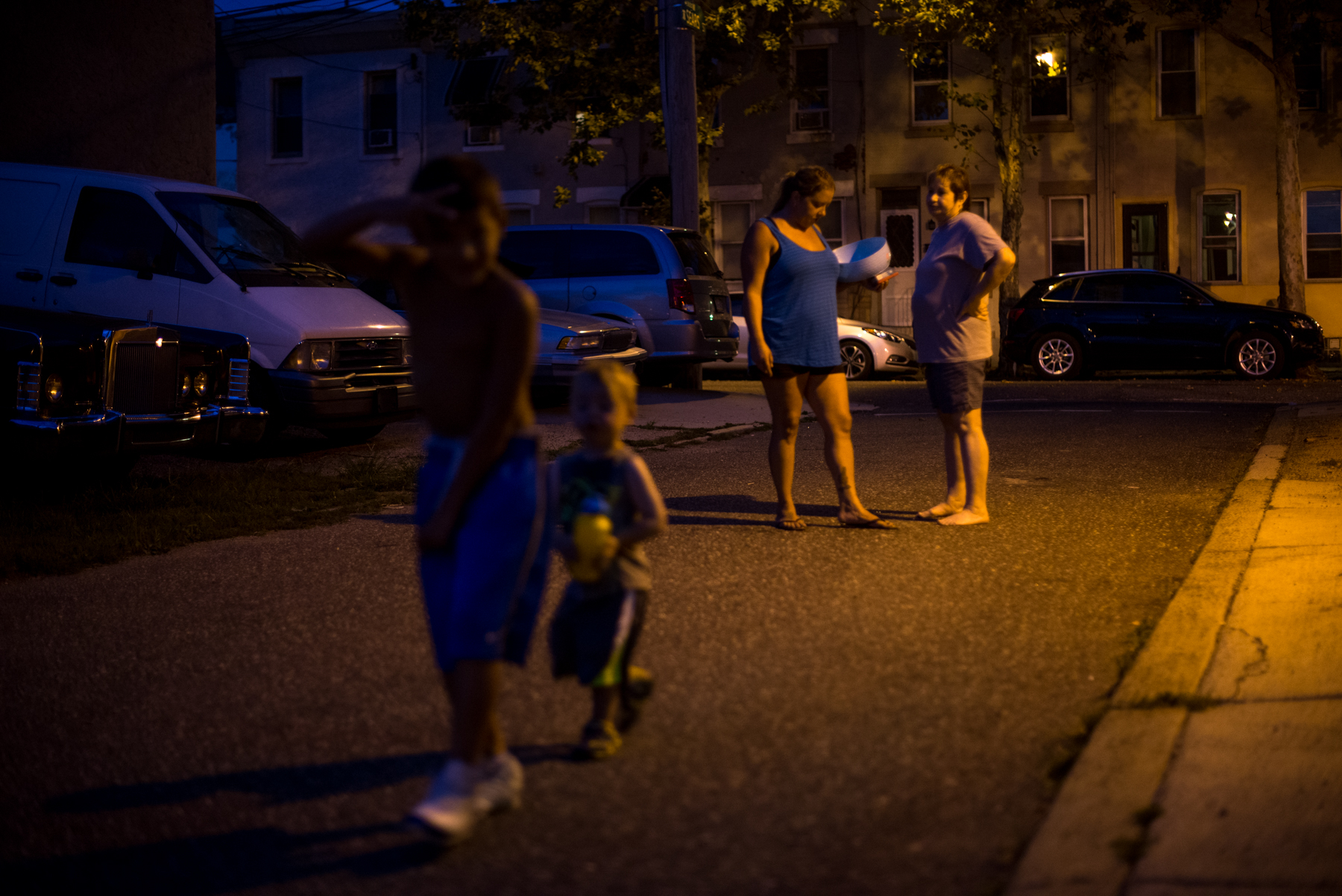 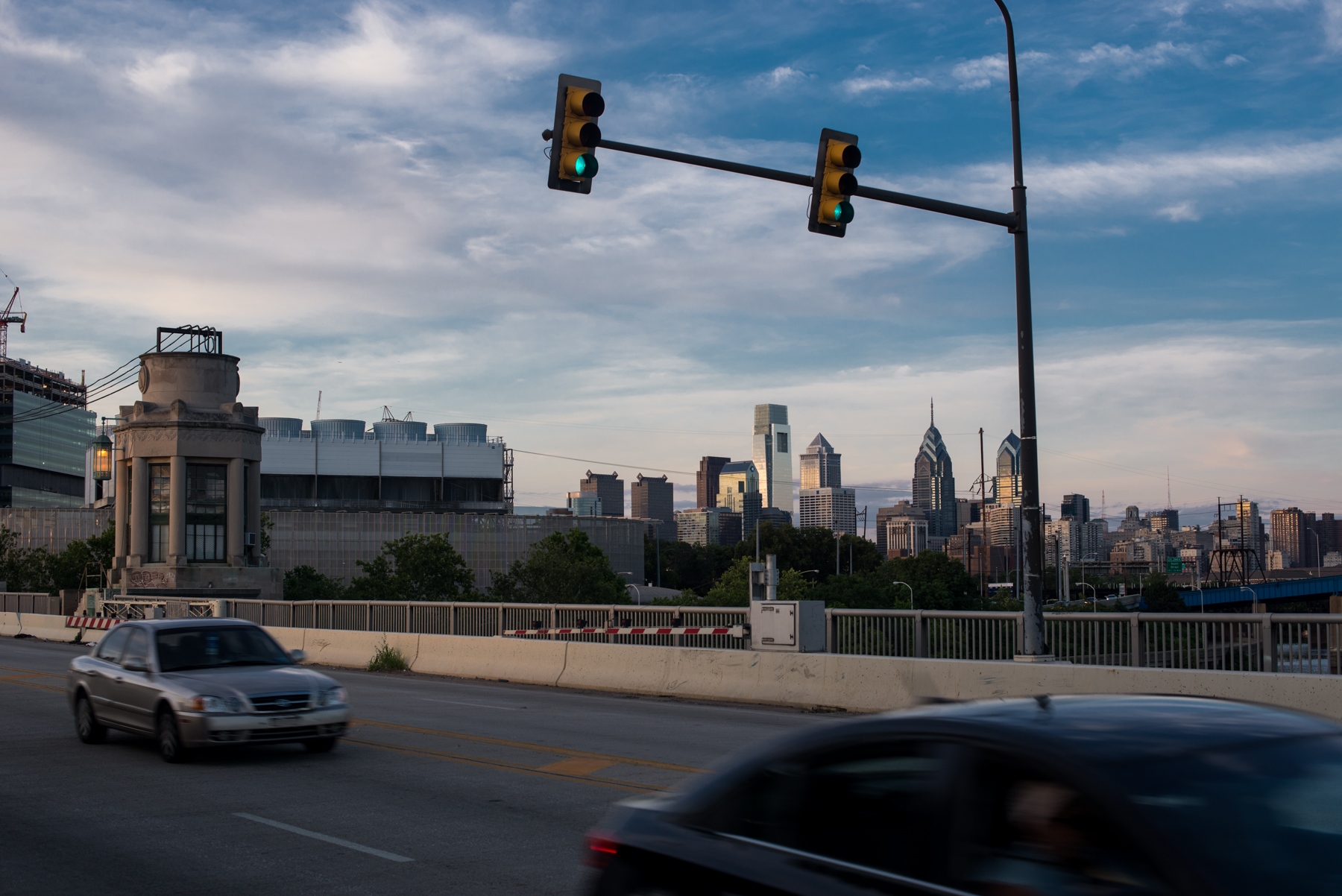 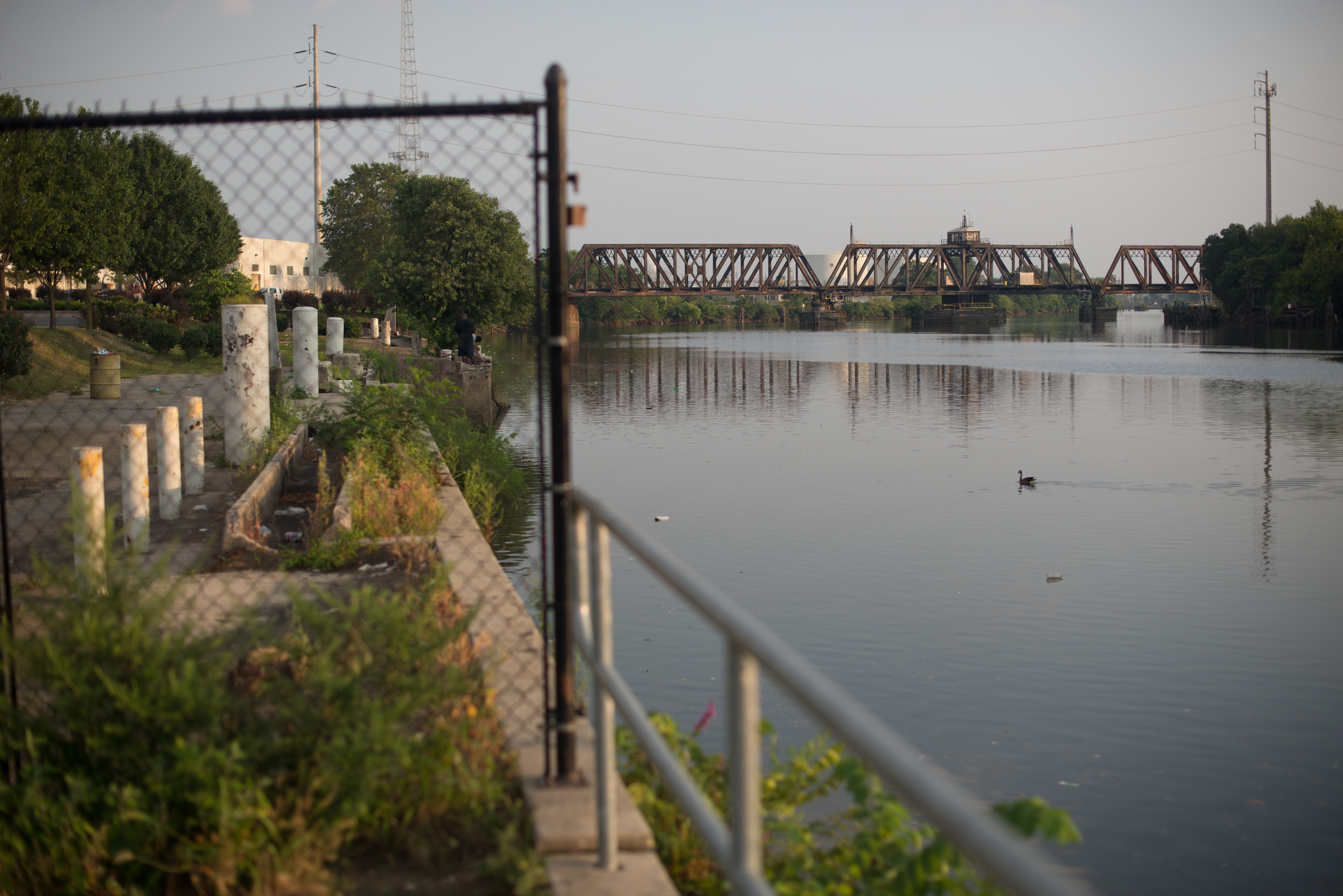 Today, living in the Forgotten Bottom, a place now unknown by many city residents and bereft of the factories and businesses that gave it life, seems offbeat. 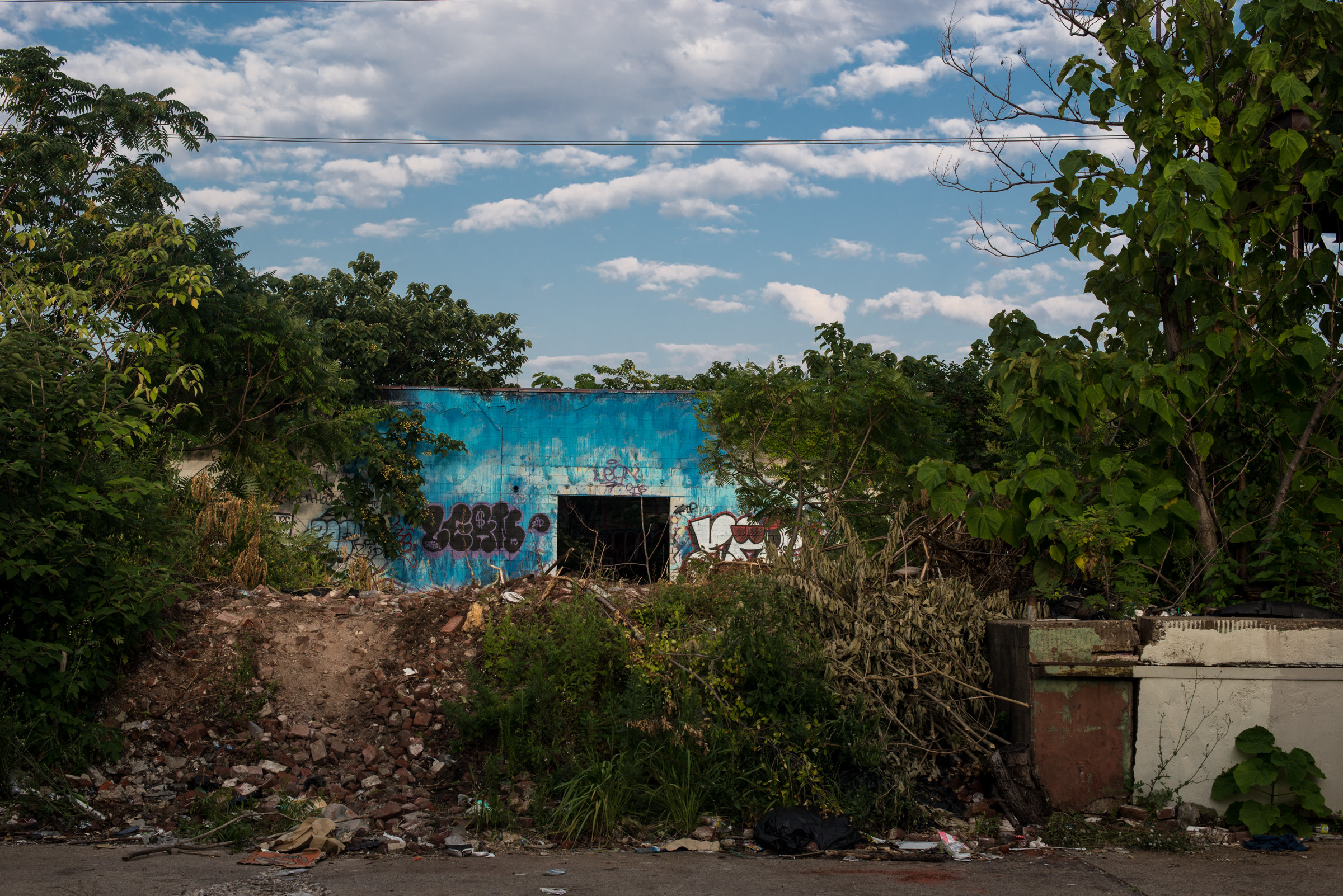 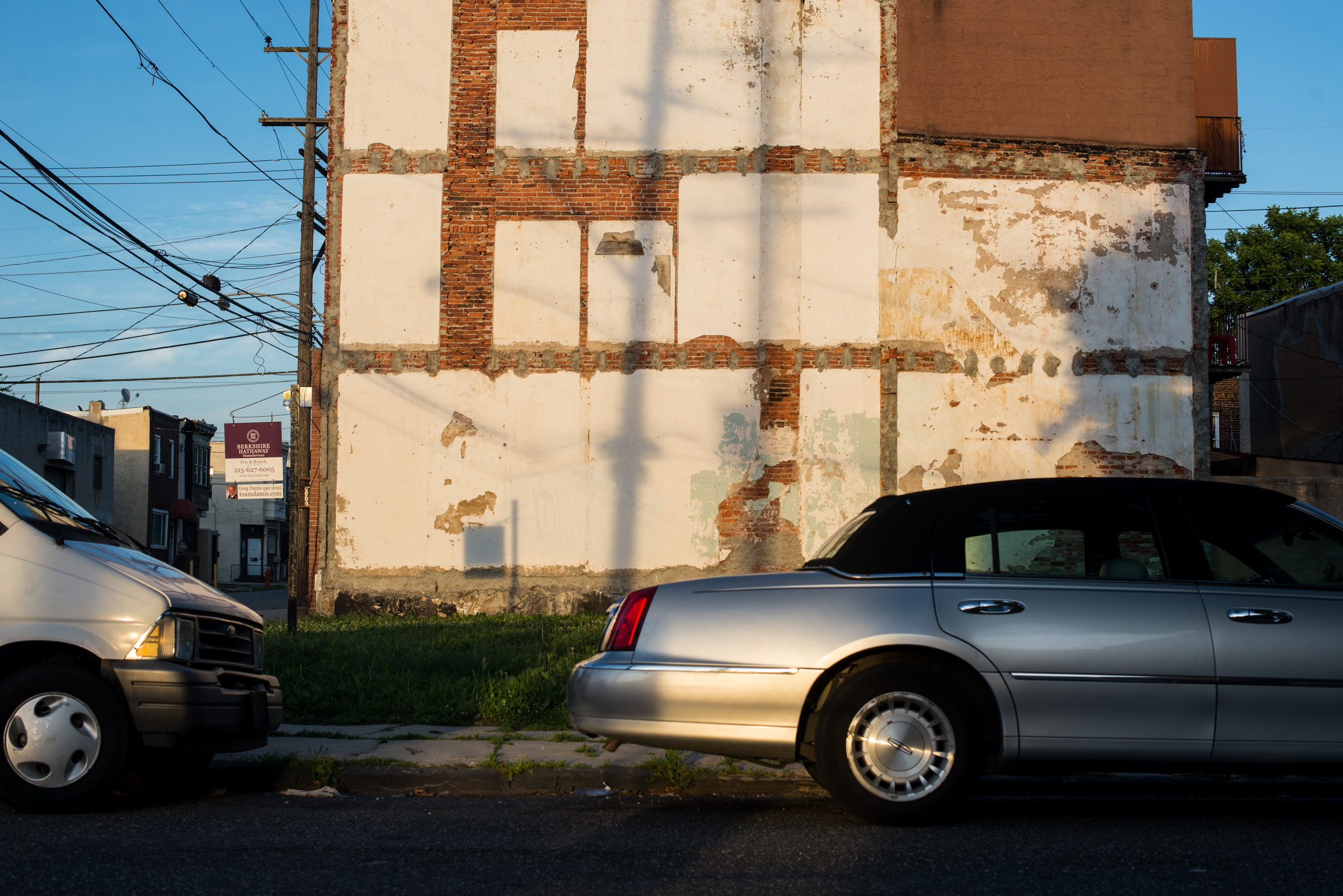 Anthony, pictured below with his son, is in many ways the quintessential Forgotten Bottom resident — he’s lived here for his entire life, and his lineage in the neighborhood goes back more than 80 years. But now he lives here alone, tied down by cheap real estate for his mechanic’s garages while his family resides in a nearby suburban area. 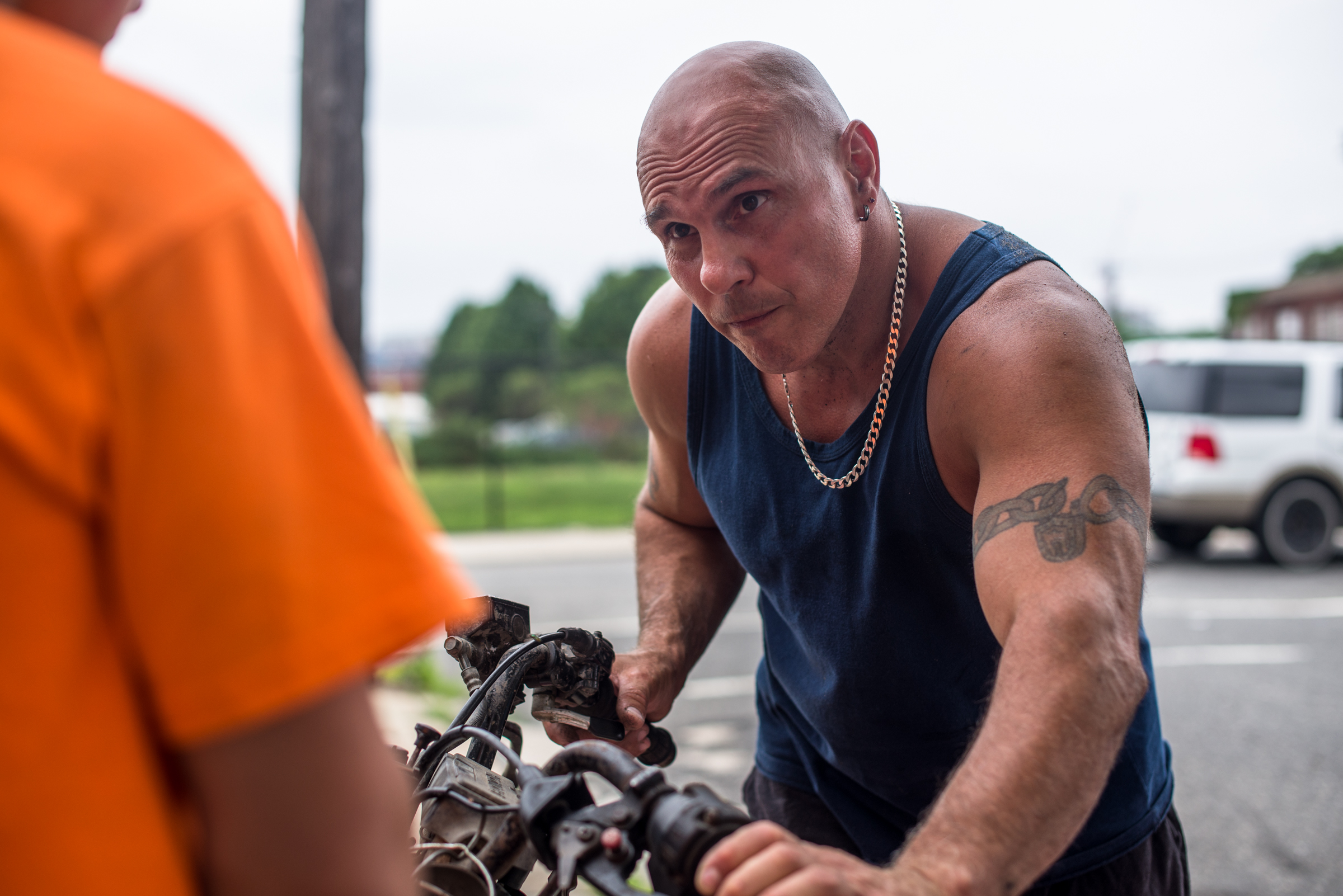 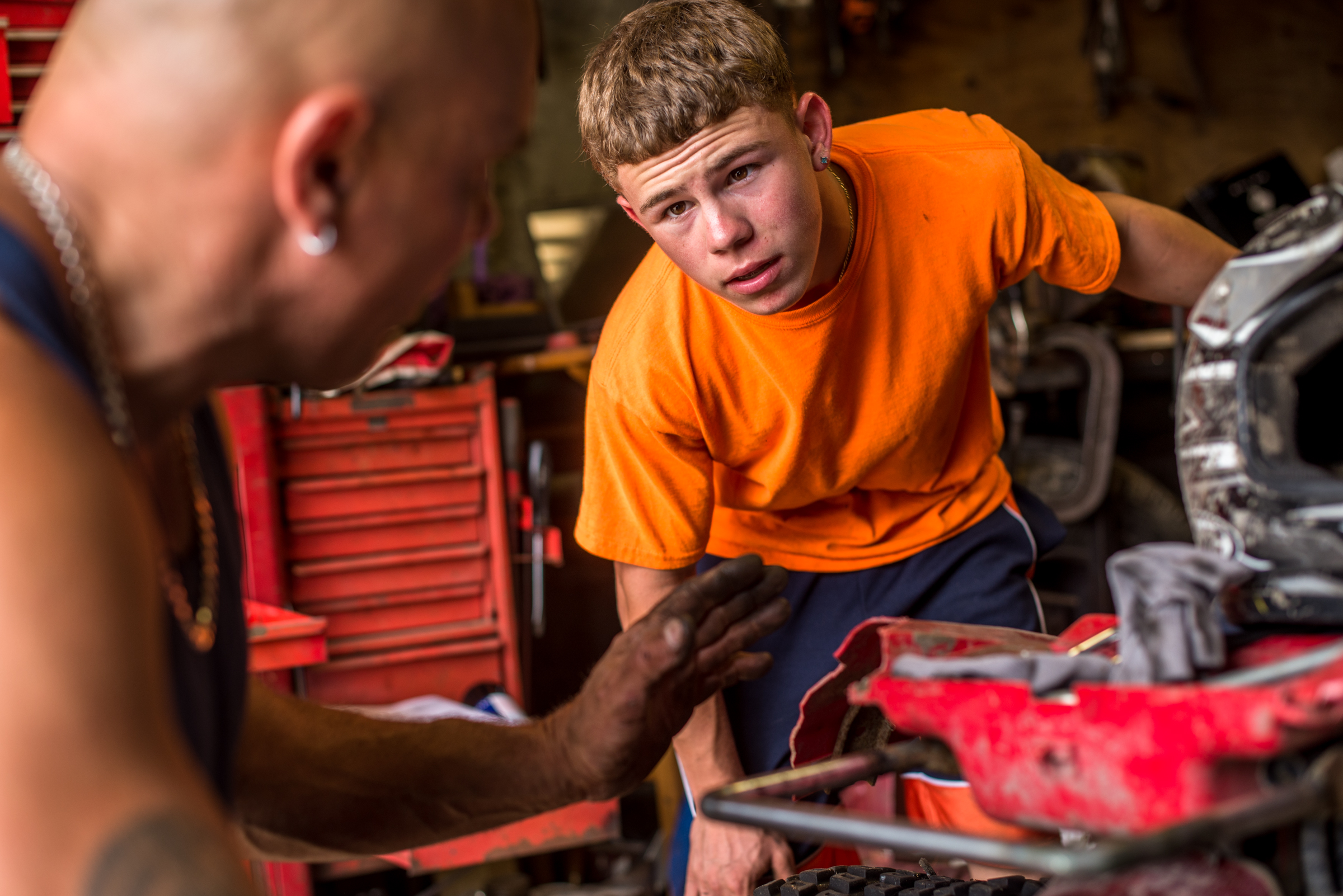 There aren’t many kids left in this neighborhood. What families remain spend many summer evenings outside on their front stoops, while their children play in the streets. In those moments, the residents of the Forgotten Bottom still conduct their public lives in a way that seems untouched by modern developments: playing catch out in the streets or sharing fresh vegetables out on the front stoop. 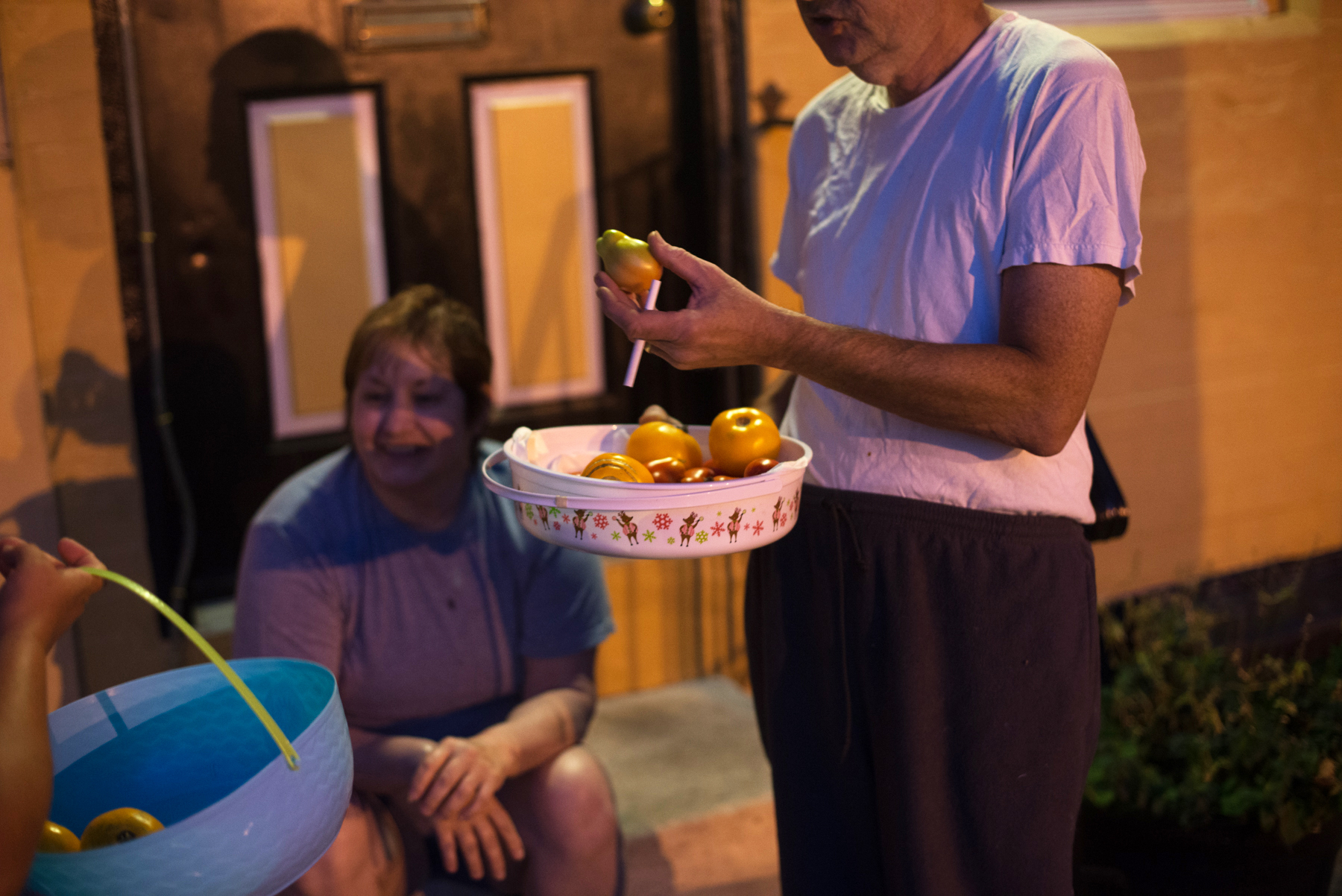 Across the river from this somewhat bygone neighborhood sits the University of Pennsylvania and a cluster of hospitals and research facilities. Developers see the Forgotten Bottom as an opportunity for housing that’s close to the expanding reach of university and medical buildings. 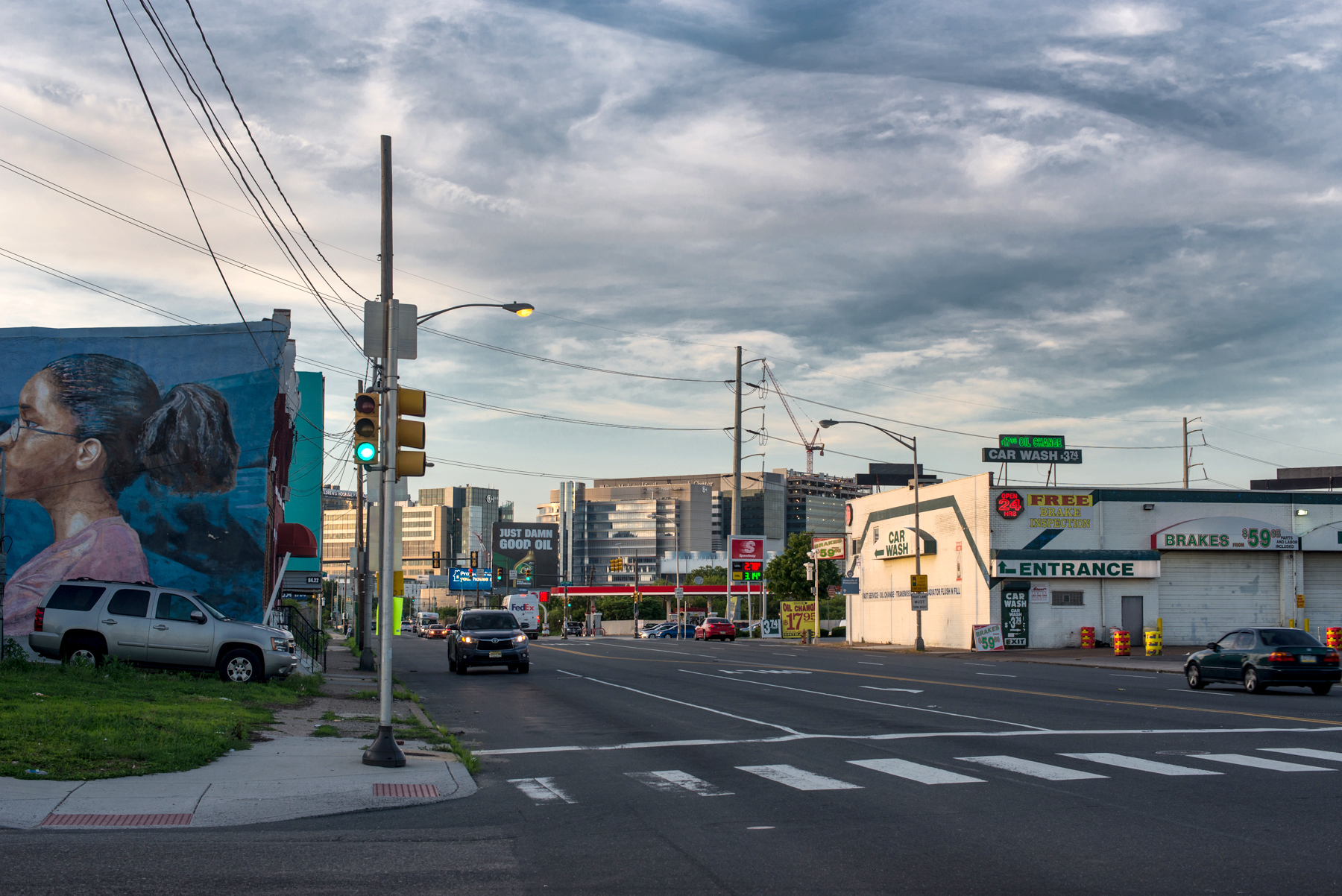 As new residents and more traffic threaten to edge in, the Forgotten Bottom’s history may once again be discarded, but the people and their memories will always remain. 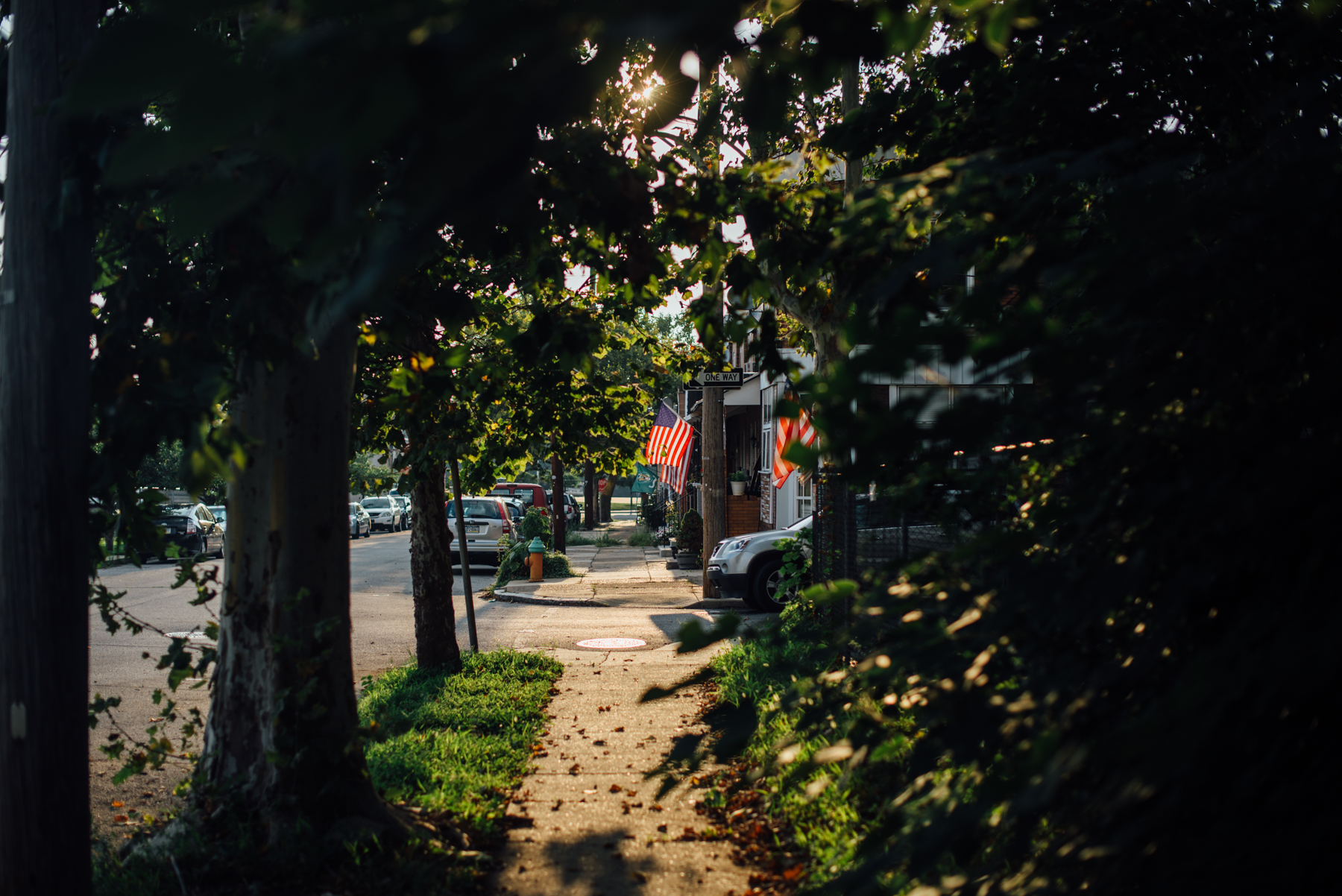 Join the discussion and tell us your opinion.

Thank you. I liked that and look forward to more. My critique is that it is much too shallow. And don’t listen to that ‘professional’. He’s probably jealous.